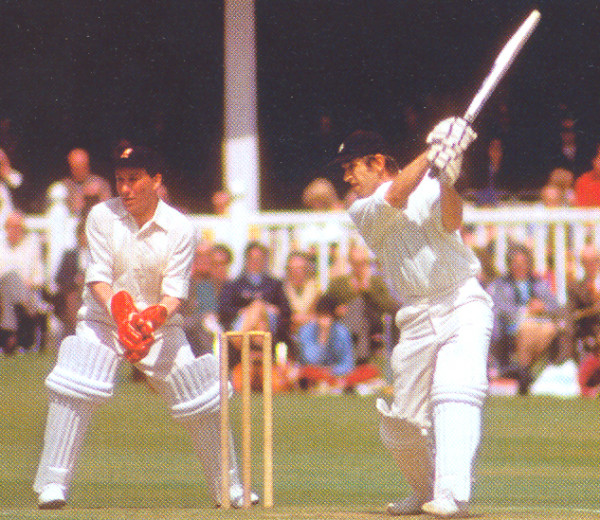 In the late summer of 1953 two fourteen-year-old boys took the last bus from Sittingbourne to London and slept outside The Oval to make certain of seeing the final Test of the series between England and the Australians. Seventeen years later one of these cricket-mad boys, Brian Luckhurst, returned to The Oval as one of England’s opening batsmen against The Rest of the World.

Brian Luckhurst was for some time simply an excellent opening batsman for Kent; at the age of 31, however, he suddenly blossomed into a highly successful Test cricketer.

His chance at international level came in 1970, when a series of unofficial matches between England and the Rest of the World was arranged in place of the cancelled tour by South Africa. After making 67 in the second innings of the opening game at Lord’s, Luckhurst carried England to an eight-wicket victory at Trent Bridge with a painstaking 113 not out in seven hours.

Luckhurst described himself as “a worker of the ball” rather than a supremely gifted strokeplayer; all the same, he liked to dominate the bowling and possessed a fierce square-cut. His greatest quality was always his determination, which was never more in evidence than on England’s tour of Australia in 1970-71, when, under Ray Illingworth’s captaincy, he played a vital role in regaining the Ashes.

After innings of 74 and 20 not out on his Test debut at Brisbane, Luckhurst overcame an injured thumb to score 131 at Perth, which in later years he considered his best performance for England. He went on to make another century at Melbourne, despite having sustained a fracture in his left little finger in the opening overs. He finished the series with 455 runs to his name, at an average of 56.87.

Luckhurst made his championship debut in 1958, as an all-rounder. But when he returned from National Service in the Royal Artillery he found that, having grown taller, he had lost the ability to flight the ball. “I’m going to get sacked,” he told his fellow professional John Dye. “I can’t bowl like I used to. I’m going to have to bat.”

He set about realising this ambition with typical grit. “Having a net with him,” Dye remembered, “was like having a proper game.” In the middle, though, results did not come quickly, and in 1961 he could hardly score a run.

The breakthrough came in 1962, when a late call went out to the 2nd XI to provide two players for the county’s match against Somerset at Gravesend. Colin Page, in charge of the young hopefuls, sent Luckhurst as one of the replacements, omitting to mention that he had scored a pair in his last match.

In the best story-book manner, Kent were heading for defeat when Luckhurst, coming in at number eight, saved the match with Peter Richardson, the England opener. He scored 71 not out, and went on that summer to make more than 1,000 runs. “Luckhurst, a dedicated youngster, looked a splendid prospect,” Wisden noted.

The promise was fulfilled. The next season he scored 1,501 runs, and after Richardson retired at the end of 1965 he was promoted to the top of the order. He developed a fruitful opening partnership, with Mike Denness, notable for a well-judged opportunism in running between the wickets.

Luckhurst proved particularly effective in one-day cricket, of which Kent were leading early exponents, winning the Gillette Cup in 1967 and 1974. He scored 5,485 runs in this form of the game, at the impressively high average of 40.62.

He retired as a Kent player in 1976, shortly after having his right index finger broken by Sarfraz Narwaz in a match against Northamptonshire.

“Lucky”, as he was universally known at Canterbury, remained a greatly loved member of the Kent cricketing scene. He was captain of the 2nd XI, club coach, and then manager of the Ames Levett Sports Centre. In 1985 he even turned out once more for the first team when they were a man short against the Australians.

His long service to the club was recognised in 2004 by his election as President. Though he was already suffering from cancer, he remained a battler to the end.

He also saved many runs through his athletic fielding, and took 391 catches. Just occasionally he would revert to his apprentice role as left-arm spinner, finishing his career with 64 wickets at 42.67 each. He even claimed a notable Test victim, Gundappa Viswanath of India.

When Brian retired from Kent Country Cricket Club in 2004 after 50 year’s of service, a short video was created and can be viewed on YouTube